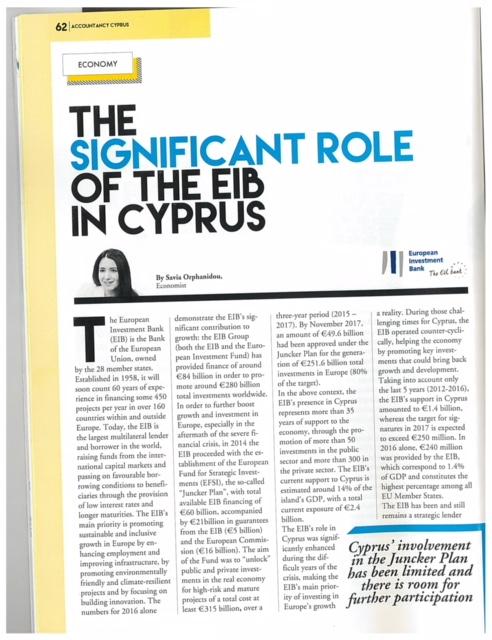 The European Investment Bank (EIB) is the Bank of the European Union (EU), owned by the EU28 member states. EIB was established in 1958 and encounters 60 years of experience in financing projects within and outside Europe, amounting up to 450 projects per year in over 160 countries.
Today, EIB is the largest multilateral lender and borrower in the world, raising funds from the international capital markets and passing on favorable borrowing conditions to beneficiaries, through the provision of low interest rates and longer maturities. EIB’s main priority is investing in Europe’s growth, by promoting sustainable and inclusive growth, by enhancing employment and improving infrastructure, by promoting environmental friendly and climate resilient projects and by focusing on building innovation. The numbers just for 2016 demonstrate EIB’s significant contribution to growth: the EIB Group (both EIB and the European Investment Fund (EIF)) has provided finance of around €84bl in order to promote around €280bl total investments worldwide.
In order to further boost growth and investments in Europe, especially in the aftermath of the severe economic crisis, in 2014 EIB proceeded with the establishment of the European Fund of Strategic Investments (EFSI), the so called “Juncker Plan”, with an available total EIB financing amount of €60bl (accompanied by €21bl guarantees from EIB (€5bl) and from the European Commission (€16bl)). The aim of the Fund was to “unlock” public and private investments in the real economy for high risk and mature projects of total cost at least €315bl, over a three years period (2015 – 2017). By November 2017, an amount of €49.6bl was approved under the Juncker Plan for the generation of €251.6bl total investments in Europe (which constitutes 80% of the target).
In the above context, EIB’s presence in Cyprus encounters more than 35 years of support to its economy, through the promotion of more than 50 investments in the public sector and more than 300 in the private sector. Today, EIB’s current support to Cyprus is estimated around 14% of the island’s GDP, with a total current exposure of €2.4bl.
EIB’s role in Cyprus has been significantly enhanced during the difficult years of the crisis, thus making EIB’s main priority of investing in Europe’s growth, a reality. During those challenging times for Cyprus, EIB operated counter-cyclically, helping the Cyprus economy by promoting key investments that could bring back growth and development. Taking into account only the last 5 years (2012-2016), EIB’s support in Cyprus amounted to €1.4bl, whereas the target for signatures in 2017 is expected to exceed €250m. In 2016 alone, €240m were provided by EIB, which correspond to 1.4% of the CY GDP and constitute the highest percentage among all EU Member States.
EIB has been and still remains a strategic lender to the Cyprus state, promoting social cohesion and investing in infrastructure across all sectors. EIB has supported the construction of many motorways (e.g. the motorway at the ΓΣΠ stadium), public schools and hospitals (e.g. Nicosia General Hospital). EIB has supported high priority infrastructure, such as the EAC Vasilikos Power Plant, Sewerage Boards (e.g. the Limassol Sewerage) and the regeneration of the Nicosia and Pafos Municipality. In 2016, EIB provided finance of €40m for the Vasilikos-Western Nicosia Water Conveyor and €15m for 2 anti-flooding additional rain water pumping stations. Very important is the EU co-financing framework loan of €200m, through which Cyprus can further finance projects and programs, which are co-financed by the EU Cohesion Policy Funds for the period 2014-2020.
In addition to the above, one should not overlook EIB’s funding of up to €162m to the University of Cyprus, in particular for research infrastructure (including state of the art engineering school), the €26m funding for research and infrastructure to the Cyprus Institute of Neurology and Genetics, and the recent approval of €35m to KODAP to build its own facilities for oil reserves at the Vasilikos Energy Center. One of EIB’s main priorities in Cyprus is to also follow closely the developments in the natural gas explorations and support energy infrastructure investments in the future.
Though EIB’s main support has been in the public sector, nevertheless EIB’s financing in the private sector has been proven a “blessing”, especially during difficult periods where access to lending by small and medium-sized enterprises was almost impossible. From 2014 until today, EIB promoted the EIB Scheme, by providing loans with favorable conditions (low-interest and long-term) due to the provision of state guarantee (recently amounted to €1bl) to ten banks, which lend to the private sector on equally favorable terms. Until today, €615m have been signed, and with about half of the money already given as loans to over 200 businesses, around 300 investments have been promoted, many of which would not have been promoted if there was no low-level lending from the EIB, and which have significantly boosted the growth of the Cyprus economy.
Additionally, the Republic of Cyprus established the Entrepreneurship Fund in 2013, with EIB financing, which is based on a risk-sharing mechanism and which, in cooperation with two banks, finances smaller firms. EIF’s InnovFin SME Guarantee Facility is also being promoted on a risk-sharing mechanism, which finances higher risk innovative investments and derives funds from EFSI. At the same time, EIB is already working on supporting energy efficiency in private households in Cyprus.
Due to the success of the EIB Scheme, as well as the lack of sizable high risk mature projects on the island, Cyprus’s participation in the Juncker Plan has been limited, thus there is room for further participation. Examples of EFSI operations are the above mentioned InnovFin SME Guarantee Facility with the two Banks, and the KODAP loan, which constitutes the first EFSI infrastructure operation on the island.
EIB’s contribution to the Cyprus economy has been proven extremely valuable, especially during the difficult years of the crisis. Our efforts should be targeted to further expand Cyprus’ cooperation with EIB, in order to further support worth-while investments that enhance competitiveness, development and sustainable growth.

*The views expressed in the article are personal