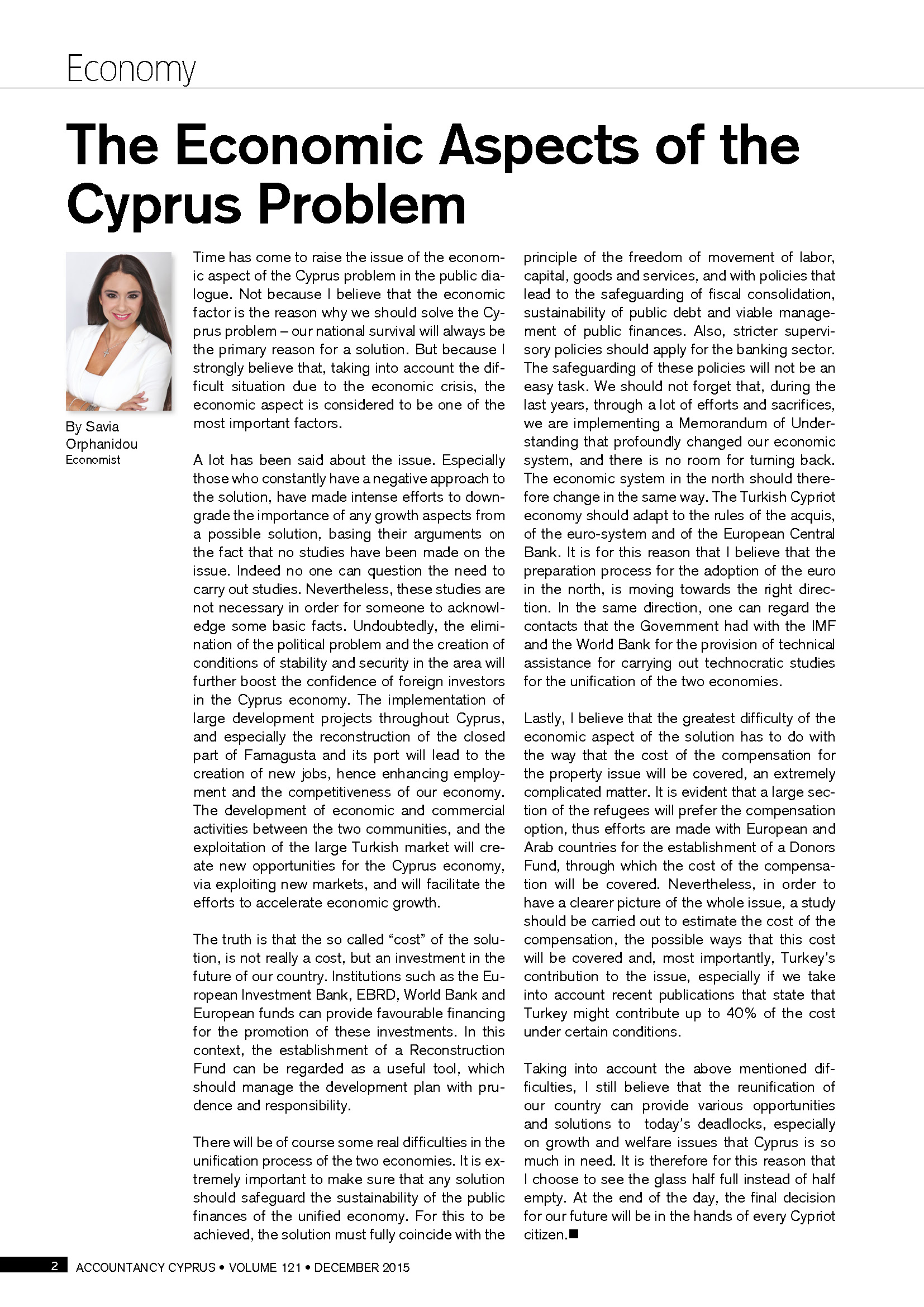 Time has come to raise the issue of the economic aspect of the Cyprus problem in
the public dialogue. Not because I believe that the economic factor is the reason
why we should solve the Cyprus problem – our national survival will always be the
primary reason for a solution. But because I strongly believe that, taking into
account the difficult situation due to the economic crisis, the economic aspect is
considered to be one of the most important factors.
A lot has been said about the issue. Especially those who constantly have a
negative approach to the solution, have made intense efforts to downgrade the
importance of any growth aspects from a possible solution, basing their arguments
on the fact that no studies have been made on the issue. Indeed no one can
question the need to carry out studies. Nevertheless, these studies are not
necessary in order for someone to acknowledge some basic facts. Undoubtedly, the
elimination of the political problem and the creation of conditions of stability and
security in the area will further boost the confidence of foreign investors in the
Cyprus economy. The implementation of large development projects throughout
Cyprus, and especially the reconstruction of the closed part of Famagusta and its
port will lead to the creation of new jobs, hence enhancing employment and the
competitiveness of our economy. The development of economic and commercial
activities between the two communities, and the exploitation of the large Turkish
market will create new opportunities for the Cyprus economy, via exploiting new
markets, and will facilitate the efforts to accelerate economic growth.
The truth is that the so called “cost” of the solution, is not really a cost, but an
investment in the future of our country. Institutions such as the European
Investment Bank, EBRD, World Bank and European funds can provide favourable
financing for the promotion of these investments. In this context, the
establishment of a Reconstruction Fund can be regarded as a useful tool, which
should manage the development plan with prudence and responsibility.
There will be of course some real difficulties in the unification process of the two
economies. It is extremely important to make sure that any solution should
safeguard the sustainability of the public finances of the unified economy. For this
to be achieved, the solution must fully coincide with the principle of the freedom
of movement of labor, capital, goods and services, and with policies that lead to
the safeguarding of fiscal consolidation, sustainability of public debt and viable
management of public finances. Also, stricter supervisory policies should apply for
the banking sector. The safeguarding of these policies will not be an easy task. We
should not forget that, during the last years, through a lot of efforts and sacrifices,
we are implementing a Memorandum of Understanding that profoundly changed
our economic system, and there is no room for turning back. The economic system
in the north should therefore change in the same way. The Turkish Cypriot economy
should adapt to the rules of the acquis, of the euro-system and of the European
Central Bank. It is for this reason that I believe that the preparation process for
the adoption of the euro in the north, is moving towards the right direction. In the
same direction, one can regard the contacts that the Government had with the IMF
and the World Bank for the provision of technical assistance for carrying out
technocratic studies for the unification of the two economies.
Lastly, I believe that the greatest difficulty of the economic aspect of the solution
has to do with the way that the cost of the compensation for the property issue
will be covered, an extremely complicated matter. It is evident that a large section
of the refugees will prefer the compensation option, thus efforts are made with
European and Arab countries for the establishment of a Donors Fund, through
which the cost of the compensation will be covered. Nevertheless, in order to have
a clearer picture of the whole issue, a study should be carried out to estimate the
cost of the compensation, the possible ways that this cost will be covered and,
most importantly, Turkey’s contribution to the issue, especially if we take into
account recent publications that state that Turkey might contribute up to 40% of
the cost under certain conditions.

Taking into account the above mentioned difficulties, I still believe that the
reunification of our country can provide various opportunities and solutions to
today’s deadlocks, especially on growth and welfare issues that Cyprus is so much
in need. It is therefore for this reason that I choose to see the glass half full
instead of half empty. At the end of the day, the final decision for our future will
be in the hands of every Cypriot citizen.